Yesterday I went to the International Industrial Trade Fair where about 500 Iranian and Foreign companies set up exhibits to show off and sell their products. Industrial equipment makers from Germany, Romania, Turkey, Czech Republic, Malaysia, Spain, England, Italy, Sweden, China, and many more countries set up booths with both foreign and Iranian sales representatives. 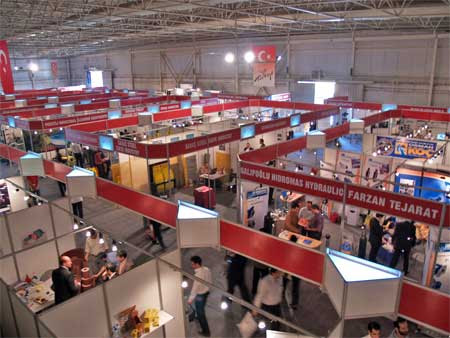 India was also one of the many nations participating in the week-long event at Tehran's main convention center. Although India has good diplomatic ties with Iran, those ties were questioned when the country voted in support of the EU3 resolution, which would have required Iran to suspend all fuel cycle activities, among other demands. The vote against Iran's legal right to continue its nuclear program came as a major surprise, since India and Iran have many trade pacts. India, by the way, is not a signatory of the NPT and has a nuclear weapons program dating back decades.

The Iranian companies at the trade show displayed many mechanical demonstrations of their products, both on a smaller scale, like the Iran Khodro car company's indoor exhibit shown below, and on a larger one. Outdoors there were many demonstrations taking place with machinery that could cut through steel 25cm thick and more. I will post more pictures of the trade show soon. Look for them under "human interest" in the photos section. 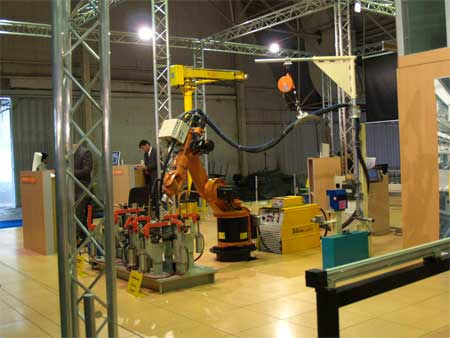 Tehran's massive convention center hosts international trade shows on a regular basis. What's interesting is that many of the Iranian salesmen wore neckties, which is an unusual accessory in Iran. The necktie has come to symbolize Imam Khomeini's "Westoxification", and many do not associate it with professionalism on a domestic level.

India never seemed to piss me off as much as they did recently. I wish there were more independent nations in the middle east. Props to Iran for thrownin up a big middle finger in the direction of the US.

Shiva jon
I am glad that you have started this site because it will certainly creats a real image of the country today instead of false one that is being put out there by the socalled democratic countries.
Persia

I think the U.S. threw one right back because I read in a recent article by Zbigniew Brzezinkski (former National Security Advisor to President Carter; i.e. Islamic Revolution era) that the U.S. recently decided to help India strengthen its nuclear program, which has already yielded weapons of mass destruction. Clearly, the U.S. isn't as concerned with nuclear non-proliferation as they are with bolstering India's vote to refer Iran to the UN Security Council in November.


oh well, i think iran is working a way to screw the 22 nations that voted against them through natural gas and oil trade. russia and china are the major factors though, they were smart. but india's move was just disappointing. they pretty much showed the world whose interests they serve.

It was great representation for International Industrial Trade Fair, i really like this.