Also happening this week is the exhibition of Iranian Revolutionary Guards, a highly trained police force that provides general security for the country. N.A.J.A. deals with drug trafficking, assault, murder, counterfeit, and other criminal offenses. 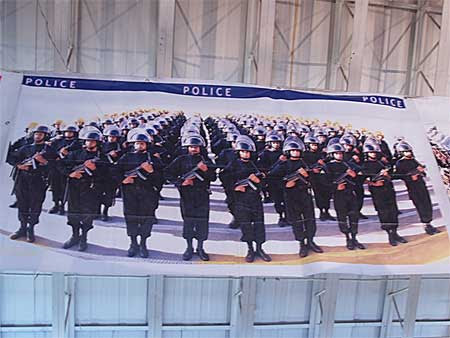 The first room features the shahids (martyrs) of the Iran-Iraq war that served in the force. Folded up blood-splattered uniforms, I.D. tags, and photos were preserved within glass cases. We saw footage of soldiers fighting--one minute shooting, the next moment dead from the explosion of the enemy's bombs--as well as recreated scenes of the battle at the front, using mannequins, props, and special effects. (Side note: all of last week was dedicated to remembering the many Iranians whose lives were sacrificed during what has been dubbed the Ten Years War. iPouya's blog does a great job capturing the raw emotions and national pride conjured up by memories of the war.)

When we entered the next phase of the exhibit, we were greeted by two mannequins dressed in full gear as well as a life-size police robot moving around the room. Later the robot proved to be an officer with impeccable body-joint-muscle isolation skills. We were invited to take pictures on motorcyles, aim and shoot rifles and handguns, learn about the various equipment used to contain crowds of protestors who get out of hand and disturb the peace (such as ink guns to mark certain individuals/vehicles or tear gas launchers), and watch officers spar with each other. We even saw special gooseneck cameras/telescopes used to find people in homes, drag victims out of rubble caused by natural disasters (e.g., Bam earthquake), and more (these cameras were made in the U.S., by the way).

The final section was the most exciting. Iran's Central Investigation Department (CID) is where all the action's at. Here we saw counterfeit I.D.s, official stamps, money, license plates, passports and more. The forensics sections displayed models of shot victims, dead embryos, and other relevant stuff to show how science and technology are used to gather evidence. Pictures will certainly be posted soon, under the "human interest" heading, in the photos section. Also, the smuggling in of drugs and illegal goods (such as non-taxed cigarettes, alcohol, etc.) and the smuggling out of national treasures (some up to 4,000 years old) made up a significant part of the exhibit.

Below is a sample of what law enforcement has confiscated from drug transporters trafficking drugs from Afghanistan to Europe. Within the last year, $600 million worth of drugs have been confiscated and burned (aside from the exhibit, drugs are usually laid out flat on a table and torched to ashes), and 3,000 officers have died. 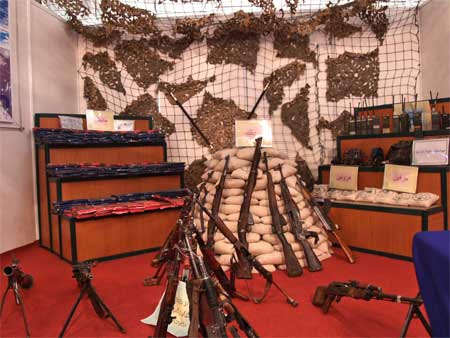 CID also handles terrorists in the country. We got to see bombs found in suitcases, books, jars of face cream, and even those little paper lamps that you see in Japanese restaurants. Outside was a collection of high-end stolen or illegally obtained vehicles that were recovered, as well as a tank and some miniature canons for kids to play with.

Overall, the officers were extremely patient--even though the place was packed--and answered our questions in great detail. There was, however, a minor incident in which I was asked not to take a picture of a special handgun that was created in Iran. The officer that made the request said, "We don't want you taking this over to the other side."

This was the most intriguing exhibition I've ever seen in my entire life. I will definitely post more pictures soon.

Thanks for visiting my site. I'm glad you enjoyed reading about the police convention; I'm not sure my words do it justice. Keep a look-out for the pictures; I will upload them soon.

Were the cops hot?

Yes, especially the robotic one.