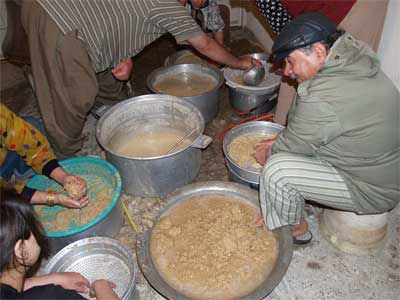 I just woke up, nobody’s home, and everybody ate the kaleh-pache. Last night, I was up until 6:30a.m. taking turns to help stir a cauldron of samanou. Samanou is a naturally sweet, chestnut-colored, pasty substance that’s full of energy, and takes 24-48 hours to prepare. You start by grinding up fresh wheat sprouts into a pulpy consistency. Then, you take the pulpy mass and squeeze it in the palm of your hand, clump by clump, until all the excess liquid drains out. This is the most arduous part of the process. I missed the steps in between, but came back when the stirring began. Since we have four cauldrons worth of samanou to simmer, several people at a time must stand watch, for an uninterrupted period of 36 hours. 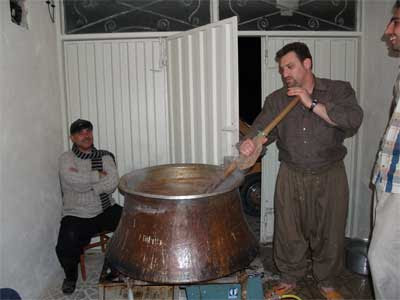 When the stirring comes to an end, the samanou will be spooned out into about 1,000 bowls, and distributed to family, friends, neighbors, and anybody else.

This is the Iranian Muslim tradition of Nazr. Nazr occurs when you ask something of God, and promise to make and distribute some kind of food to hundreds, perhaps thousands, of people, in return. Families may carry out 3 or more Nazris per year, depending on how many of their wants were fulfilled. In this long weekend alone, we’ve gotten kaleh-pache (sheep head and feet), ghormeh sabzi (a stew with rice), sholeh zard (sweet rice pudding made with rose water and saffron), and more. My cousin’s Nazri consisted of kabob and rice for 1,000 people, the preparation and distribution of which they contracted to an outside kitchen; many people nowadays pay others to do the work if the dish is difficult, or reaching near 1,000 portions or more. My aunt, a do-it-yourself type, slaughtered sheep in her backyard, and received help in properly cleaning, chopping, and packaging them for Nazri giving.

The good thing about Nazr is that the majority of Iranians carry it out multiple times per year. Around major religious holidays, a household can go an entire week without cooking a single meal. On a related note, most here would likely agree that nobody in Iran dies of hunger. Perhaps it’s because of all the religious obligations tied to the impartial giving of food that citizens readily assume.

Well I love Nazris i can still taste my grand uncle's Aush and the gheimeh that we used to give out. the part i most like about Nazri is that one can feed alot of people with their digniy intact as apose to feeding the homeless in US.
love your site

I am not Persian, but I love Persian culture. I have had Kaleh Pache once at restaurant in Los Angeles. It is a rich tangy soup with sheep head ( and feet ? ). It was a bit hard for me to get comfortable with the idea - and I'm not sure I did , BUT it taste wonderful for sure. I love Tachin, Fassanjoon, Tadik with all styles of Iranian Khoresh ( stew ). I just had some samanou last night froem the Persian deli near me. It has a sweet, hardy flavor. The texture was best for me when it was hot - straight out of the kettle. But it is a satisfying snack cold from the fridge anytime night or day, before or after meals.