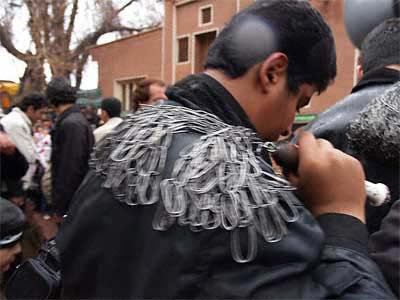 Various parts of Iran may often attract tourists because of the unique way in which the locals celebrate nationwide events. For Tahsu’a, the ninth day of Mahe Moharram, we traveled from Esfahan to Abianeh, a district situated about an hour out of Natanz. The mourning festivities there revealed many of the symbols I had seen elsewhere, such as massive, ornately decorated standards settled heavily onto a single man’s shoulders; parades of men openly wailing, while others watched; huge tents set up to serve people tea and cake; and much more. 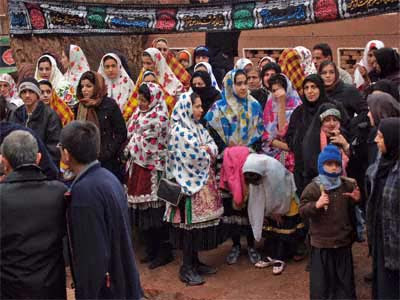 But Abianeh celebrations had meshed local characteristics as well. For instance, the dress code of men and women here differed greatly from that in Esfahan. Women in Abianeh donned bright, flower-printed skirts and dresses that hovered just below the knees; their oversized head scarves, sometimes splashed with a gold and cherry plaid pattern, framed freshly beautified faces. The men, fully clad in black, sported wide-legged pants that were reminiscent both of the garb featured in martial arts films as well as those mega expansive jeans that were so popular among the Skaw kids sometime back. 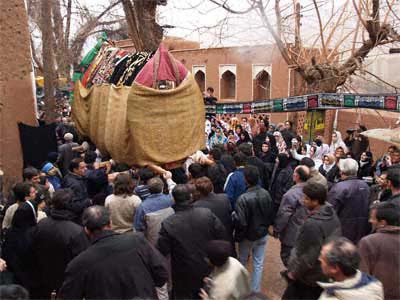 Another distinguishing factor was the colossal sarcophagus representing the tomb of Emam Hossein that required the might of at least 20 men to haul it through Abianeh’s winding streets. Finally, the entire district, which is comprised of rustic surroundings and multi-storied, reddish-brown mud-brick homes flanking narrow cobblestone paths, was festooned with multihued banners, lights, images, and more. Also, I witnessed about three sheep slaughtered in front of private homes, which will later be cleaned and prepared for public distribution.

So you saw Abyaneh. I am glad that you are experiencing all this first hand and thank you for sharing it with all of us.