Well, Happy Sappy V-Day. College kids in Tehran are probably giving their friends or significant others lame-o gifts, just to be cool. I heard it’s become trendy to buy your girlfriend or boyfriend Valentine’s Day cards with English written on them; it’s even more fashionable to compose your own personal message in English. And even though both the purchased card and the scrawled greetings may falter in proper sentence construction and grammar, and present an incoherent communication all together, it doesn’t matter because English is cool, and Valentine’s Day is a chic concept. 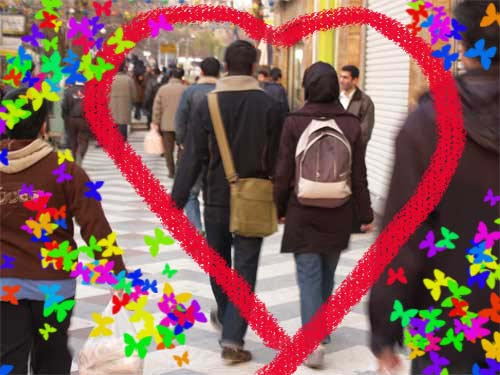 By the way, I completely forgot it was Valentine’s Day, until my cousin text-messaged me a greeting. He became privy to the holiday because of the giddy atmosphere in some circles of his university. Anyway, Valentine’s Day celebrations among college kids have become more popular as laws between the sexes have become more lax. A few years ago, a law was passed prohibiting officers and Baseejis (volunteer forces) from interrogating the relationship status of girls and boys that hold hands. In Iran, you must be engaged, at the least, to touch unrelated members of the opposite sex, in public. Now, however, it’s quite common to see couples strolling down the street, hand-in-hand, and sometimes even with a whole arm around each other. But you still won’t catch a public kiss, even among married couples, perhaps partly because it’s also considered culturally tacky, in general.

I like oshshagh day celebration however, i don't like it when it is done just to be considered cool. love your reports
keep on writing