"Sometimes you wanna go where everybody knows your name, and they're always glad you came..."

The theme song from that old show "Cheers" kept playing over and over in my head as my family and I commemorated the one year anniversary of my Pedar Bozorg's (Grand Father's) passing this weekend (i.e. Thursday & Friday). Everybody in his village of Ourreh, nestled in the town of Natanz, seemed to know me well. Apparently my grandparents were popular folks, and spoke about us often. Although I'd never met any of these 100+ people who came out to pay their respects, I felt at home.

The ceremony was held at Chahar Bozorg burial ground, where four imamzadehs (ancestors of imams) rest in peace. These grounds are reserved for prominent people, such as my grandfather (and grandmother, who's buried at another imamzadeh site), and their kin.

In villages, where people tend to be friendlier, more generous and more religious than in cities like Tehran, most women and girls wear black or floral print chadors (sheets draped around the head and body, and held closed beneath the chin). So, when I showed up (late) in my sparkly grey monto (coat) and floral print headscarf to meet my parents at the ceremony, I felt a pang of guilt for at least not wearing black. Nobody seemed to mind, of course, but I hate appearing so ignorant. Fortunately, I wasn't alone; my mom's fire-engine red monto screamed, "HELLO, HERE I AM, RIGHT AT THE CENTER OF THIS WHOLE SHIBANG!" When I went and sat down next to her on my grandfather's grave, she reassured me that our clothes were fine, and that we weren't required to wear dark colors.

We sat on my grandfather's tombstone (below) as the religious service proceeded. The "ahkhond" (holy dude who leads prayer services) recited several passages from the Qur'an, philosophized a bit, led the prayers, then initiated the public mourning. 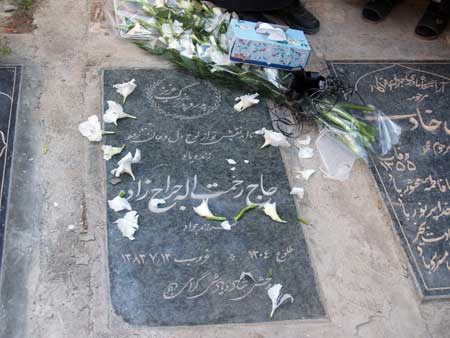 Now, public mourning occurs when the ahkhond begins to tell heartwrenching stories of people of the book, in a voice full of sorrow and anguish, almost as if he was wailing. It's a very passionate display of emotions that--regardless of your faith--will force you to cry, or sob uncontrollably. Even though I didn't understand most of what he was saying, his description of the suffering of others, matched with the weeping of the men and women around me, and the thought of my grandfather's lifeless body wrapped up and buried beneath me kept me desperately choking back tears. I only succeeded because I diverted my attention to grass. Cold, crisp, green, boring grass. I'm not used to death, maybe because I was born and raised in southern California, with virtually no extended family around, and never having to share any grief.

After the ceremony, we walked to the local mosque to host the Eftar (break-fast dinner) for about 200 people. Travelers are not supposed to fast (and neither are people who are sick, pregnant, menstruating, and more), but healthy people who don't eat/drink anything after sunrise and before sunset look forward to Eftar.

To accommodate what appeared to be the entire village, chicken and rice were cooked in massive black iron pots (think of the kind witches use that hang over the hearth) that had to be lugged back-and-forth from the campfire to the kitchen by three or four men; a vinyl green sheet was draped from one end of the mosque to the other to divide the room into the men's and women's sides (I imagine for reasons of comfort, while dining); sofres (plastic mats laid out on the floor and set up like a dining room table) running lengthwise between two rows of people were stacked with traditional food--dates, bread, feta cheese, and sabzi (green vegetables); and drink--tea.

After dinner, the same ahkhond (who later sped off on his motorcycle after Eftar came to a close) led both sides in evening prayers. Ramadan becomes the ahkhond-bazaar (to paraphrase my cousin) because it is during this month that ahkhonds gain the most business, as the demand for religious services is the highest of the year. I will post pictures of this trip under "Family" in the photos section.

May God rest his soul.
I never had the chance to be a part of my grandparent’s funerals. Every time I think about it, I feel upside down!
Thanx 4 sharing

Shiva, I'm glad to know that you were surrounded by friends and family during this difficult time... Know that I'm here for you.