Yesterday, my friends and I took a couple of taxis down to Villa Street, the one-stop shop for souvenirs. We were on the prowl for a special gift, one that was distinctly Iranian as well as fashionable. One of our friends, a 100% Italian girl with a Bachelor's degree in Farsi, was leaving Iran for good. We had a day to find the perfect memento, before attending her goodbye dinner that evening.

The first prospective vendor greeted us with heavy bronze metal doors shaped like an entrance to a castle, and arched windows splashed with a colorful array of Oriental-ish themes (ones that come to mind when you think of the Middle East). To top it off, the outer walls were designed to resemble mud brick buildings, giving the boutique an rustic and ancient feel. Crammed inside were piles of vibrantly hued handmade rugs with geometric patterns; walls decked with paintings of traditional people and scenes; and a glass counter stretching across the rear displaying hand-crafted gold and silver jewelry complemented by black pearls, turquoise, and different shades of agate.

We decided jewelry was the best type of gift for our friend because we figured she probably wouldn't have much room left in her suitcase for large or heavy items. Although the selection was admirable, we thought it better to look at some other places on Villa Street, before making up our minds.

The next boutique was enclosed by a glass window outlined by sparkly gold images of soldiers from the Persian Empire. Inside were intricately painted metal plates, boxes and frames adorned in the traditional Khatam design (the most common geometric pattern applied to ornamental gifts), and a plethora of other artistic delights. There were also Opium and Cannabis-scented incense sticks from India for sale.

Living in Tehran has awakened the Esfahani half of me. People from Esfahan are reputed to be frugal spenders, and shrewd at anything related to commerce and trade. In my case, I'm not particularly fond of being ripped off, and all the shops lining Villa Street were clearly in the business of bamboozling foreigners. Luckily, I'm a bit familiar with the rates of many of these goods because of my experience with Esfahan's bazaars (the hotbed for souvenir items). But many foreigners (and even Iranians who haven't been to Esfahan) don't realize when they're paying two to 10 times more than the normal retail price. During our trip down Villa Street, I found that jewelry made with turquoise cost around 2500 tomans/gram; yet only 20 minutes away, in Tehran's Grand Bazaar, the base was at 900 per gram.

Tehran's Grand Bazaar, like every bazaar, resembles a mangled web of alleyways and compartments with merchants selling every necessity imaginable. There's the rug quarters, the fabric district, the nuts and fruits section, and the jewelry hub, among others.

Since my two friends stuck out like sore thumbs--one a New Zealander, the other, an Oregonian of 1/2 Iranian, 1/2 American descent--haggling would be a bit more difficult. Bazaar merchants will usually inflate their rates for everyone, especially foreigners, but are simultaneously always open to aggressive bargaining.

As a test, Leila (the 1/2 Iranian), in broken Farsi, asked the price of a cigarette case made of silver, and bearing a vivid mosaic design. The vendor replied, "400 tomans", meaning 400,000 tomans. So, if 900 tomans equal one dollar, then we're talking $400+ for a measley case! After a couple of hours meandering through the maze of shops, we returned to the same stand. This time, the vendor was different, and I had asked Leila and Greg to linger behind, somewhere in the crowd, so I wouldn't look like a host to foreigners ripe for ripping off.

In this round, sans foreigners, the same cigarette case was quoted at 270 tomans (270,000). I'm betting that if my uncle, an Esfahani working in Tehran, had played the role of the prospective buyer, the case would've cost as low as 80,000 tomans--before any bargaining attempts.

Anyway, we found the gift we were looking for at another jewelry shop within the bazaar. Fortunately, Greg and Leila kept a low profile, as I dealt with the merchant, allowing us to snag this chic necklace and earrings set made with silver and Nashabouri turquoise: 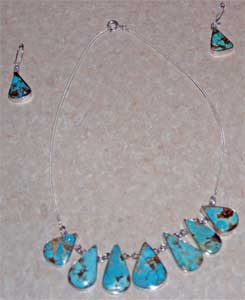