The night before last, Iranians everywhere gathered around bonfires with family and friends to celebrate the eve of Chahar Shanbeh Soori, or Fiery Wednesday. Traditionally, this ancient holiday is practiced by jumping over flames, and chanting phrases like, "Sorkhiye toh az man, zardiye man az toh." Meaning, your (the fire's) glow/ruddiness in exchange for my (the jumper's) fatigue/pallor. This was my first Chahar Shanbeh Soori in Iran as well as my first dangerous encounter with fireworks. 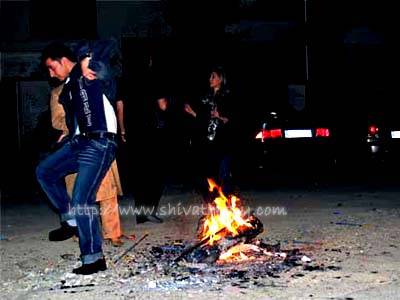 Beginning three weeks ago, NAJA officers were on high alert to monitor fireworks activities because, for many of Tehran's youth, Chahar Shanbeh Soori starts about a month early, when firecrackers can be bought from street vendors. Aside from the legal variety, teens and kids in their 20s manage to get their hands on Molotov cocktails, grenade-type concoctions that discharge a bunch of stones upon explosion, and other injurious items that are illegal. These fireworks are also thrown at pedestrians, windshields of moving cars, high school teachers within campus buildings, and other inappropriate targets. Some of these amateur pyrotechnists also spit gasoline from their mouths into a lit match, creating a fireball effect.

Also beginning three weeks ago, one Iranian T.V. station (out of the whopping seven, or so) had aired a number of hour-long primetime specials on Iran’s Chahar Shanbeh Sooris of recent years. These cautionary documentaries show the chilling effects of recklessly setting off fireworks, such as the third-degree burns on kids' faces, the charred stubs of people whose limbs were blown off, young men who'd gone blind after a firecracker burst too close to their faces, the boy missing his eyeball because he was hit by a random explosive, hospital burn units overcrowded with maimed patients, and other incidents reflecting the gory aftermath of pyrotechnics gone awry.

Tehran's police force has tried to contain this wildly unsafe way of celebrating Chahar Shanbeh Soori. Outlawing the holiday, at least in public streets where passersby can be targeted, simply doesn't work; instead, officers set out to guard the streets weeks ahead, hoping to arrest individuals with illegal firecrackers, while also collaborating with the news station to inform the public about the consequences of unrestrained fire play. Most people refuse to leave their homes from Tuesday morning, with students voluntarily taking the day off from school, in a bid to avoid accidents.

On our street, the neighbors came out at sunset, set a few bonfires, and allowed their kids to throw around fireworks that sound the way a car tire does when it bursts. These neighbors were family people, among them doctors and engineers, including a few foreigners under diplomatic status. But still, when my cousin and I stepped out to observe the festivities, a little 5-year-old brat launched his firecracker directly at our stomachs, causing us to jolt back, away from the potential eyeball exploding catastrophe. The brat just giggled, and went about throwing around more. Nobody thought this was wrong.

Growing up, my parents taught me never to point a gun at anyone, throw sharp (or flaming) objects at people, or to purposely startle or shock anyone, just for personal amusement. And if I dared do these things to elders, I would be reprimanded without mercy. So, I'm surprised that despite me and my cousin's expressions of utter alarm, nobody told the kid, "Hey, aim the other way." 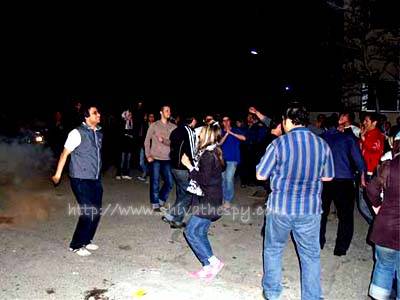 Anyway, the family fun began to die down when a bunch of college-aged kids pulled up in a black hatchback, opened their trunk to reveal a highly sophisticated sound system, and let loose bass-heavy Iranian dance music, turning the street into their own personal nightclub. Not long after, another hatchback, this time white, rolled up, parking face-to-face with the black one, and popped its trunk to blast a different Iranian mix, simultaneously. The scene looked like a competition between discos, with about 40 players on each team, and a bunch of spectators on the sidelines.

In no time, the party duel dominated the Chahar Shanbeh Soori ceremonies on my street. Young people flocked from unknown places to take part in the revelry. Almost all of the girls were rocking to the music, headscarves hanging around necks, with their punk hairdos fully exposed. The guys would tear up the asphalt, boogeying down with various girls, sometimes embracing them, and introducing some skilled Iranian dancing, while also throwing in some raver moves. I'm fairly certain that at least a couple of guys were drunk from alcohol, or high off of X.

As I tried snapping pictures, some members of the crowd would turn their backs to the lens subtly, or headscarves would magically appear atop exposed manes, or bodies would slow to a still, or other sly maneuvers would occur to make my pictures look less unruly. I think they thought I might use these pictures against them somehow, either by turning them in to their schoolmasters, showing them to their parents, or taking them to the police. For a bunch of rebellious adults, they still made it a point to appear 'kosher'.

I’ve encountered this paranoia before, which seems a bit unwarranted, yet widespread, among youth. They want to be visible and flashy, yet at the same time, they want to operate covertly.(I’ll post about the countless contradictions of Iranian society, later.) 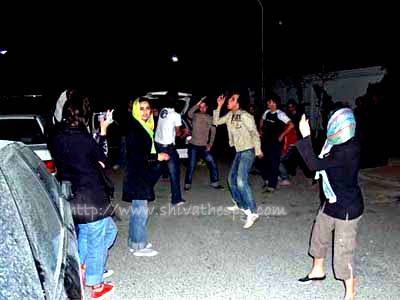 Besides the dancers, crowds of spectators too shy to partake lined both sides of the street, while others continued to light fireworks. One thing that irked me was that people setting firecrackers kept tossing them at the dancers. Although I wasn’t grooving with these partiers, many of whom had migrated from one block over, I got burned with flying shrapnel several times, the intense pain of which I could feel through my jeans! Soon, this scenario was becoming repetitive, as the constant firecracker-throwing of friends at friends starting causing people to quickly lose interest in the festivities.

After withstanding the boredom a bit longer, my cousin and I doubled back to our place around 11 p.m. We were disappointed that this crowd of kids our age never actually started a decent bonfire, in line with the actual point of the event.

Your website is great !! I am not iranian, but my b-friend is. He always talks about Iran (which he has not visited for 5 years) and I would also like to know more. This presentation of the Chahar Shanbeh Soori is great. If you could detail more on the social issues, the new/old generation concepts of iranian socity it will be good. I would like to know and understand iranian society better. Thanks a lot,
H.

Shiva, this is a great story. Thanks for bringing it to your site! Also, the pictures are really cool. I am sorry I missed Chahar Shanbeh Soori over here. Take it easy. You don't want to upset your wounds.

Nice post about 4shanbe soori. I was a kid in 80s and I remember the police at that time did not let poeple to have a bonfine in streets since they tried to stop this festival and called it anti-Islam. that diverts youths from traditional 4shanbeh sooro to making semi-bombs since they could throw it in the street and run away safely from police officers.

This comment has been removed by a blog administrator.

what about ghashoghzani? Did you get to experience that?

Shiva joon Love your charshanbeh soori's peice. There is more to it. Please write about ghashoghzani as well.