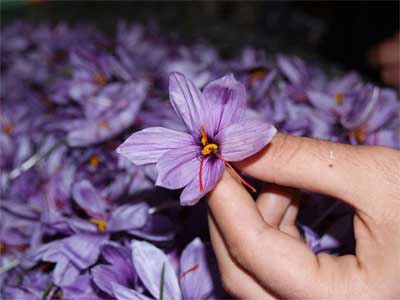 Iranians say saffron makes you laugh...that's probably because it acts as a potent drug, from which one can overdose and die, if too much is consumed. Saffron is one of Iran's top non-oil exports, next to pistachios, rugs, and caviar. The spice is considered the most precious in the world, rich not only in color and flavor, but also in price.

Each saffron flower contains three stigmas that are handpicked; imagine how labor-intensive this process can be. From March 2004-05, saffron farmers exported 172 tons of these dark burgundy saffron threads, bringing in about $94.9 million. Despite Iran contributing to 80% of global production, Spain dominates the saffron market. The European country only produces 12% of world supply, yet it holds the title for one of largest exporters of the spice. It's more appropriate, however, to refer to Spain as the largest re-exporter of saffron, considering it imports nearly half of Iran's total output, then repackages the spice under its own brand names and sells it to the world. 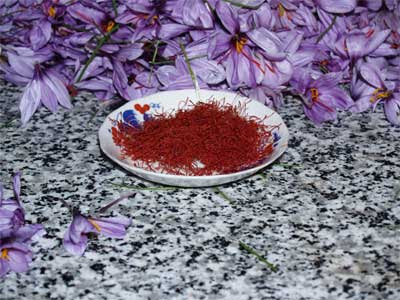 The biggest losers in the game are saffron farmers, with 600,000 quitting the trade and moving to more urbanized settings in search of work. Saffron profits continue to dwindle, as producers try to compete with re-exporters, minimal state assistance, outdated technology, surplus in supply, higher production costs, and other environmental factors. Inadequate packaging and weak international marketing have also served as obstacles to promoting Iranian saffron in the global arena.

The agricultural sector has plenty of potential in Iran, but it has often been neglected, in terms of production capacity and diversification. Many Iranians blame the government for paying insufficient attention to cost-cutting measures, such as new technology and expertise, while simultaneously trying to promote exports of non-oil goods.

I liked the post. Do you know any source which I can find more information about Saffron industry in Iran? I can not understand why Spanish merchants can do the packaging but their Iranian counterparts are not able to do that. Is there any binding regulation in Iran? Why this is the case for saffron but not for Pistachio?

This is very interesting, thanks. I think Saffron was also grown for a time in England, though perhaps not now; I have saffron crocuses in my garden, but simply because they are pretty, not because I am harvesting the spice (though, gee, maybe I should). I'm enjoying your blog, learning a little from it.

Hi great piece of info. I really enjoy your blog shiva!!!! Keep up the good work.

One reason is that Iran's government has discouraged the formation of an industrial middle class, said Abbas Milani, director of the Iranian studies program at Stanford University, who left Iran in 1987. That would leave 80 percent of the economy essentially in the hands of the state. As a result, there is no solid cadre of business leaders to pressure the government

Despite its massive oil reserves, the country has very little capacity to produce substances like gasoline and jet fuel. He estimated Iran's imports in this area are at about $10 billion a year, a figure that may represent up to a third of all imports.

Dances With Foxes! (true nature of the mullahs)

Hi, Pouyan,
I read a few articles on the saffron industry in Iran Daily's newspaper within the past few months. Since the paper is an offshoot of IRNA, I'm sure you can search for info on both these entity's websites: Iran Daily and IRNA

Dear Nyx, Jarvenpa, and Persia:
Thanks for all the kind words, and for visiting my site.

Anonymous,
I appreciate all the links.

Hi.I am from Sarayevo.I need help from you.Can you enumerate me some of Iranian spices,on Inglish-please.
Iam very intersting about Iranian spices,and I love to use them in my food.Thank you.:)