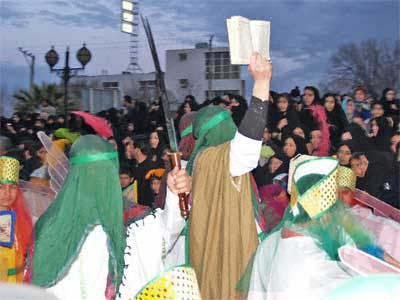 Mahe Moharram, the first month of the Muslim/Hijra calendar, is one of four months in the lunar cycle where bloodshed, belligerence, or any kind of act that inflicts physical injury or harm to another, without consent, is religiously prohibited. Those who violate this tenet in the Koran must pay double the penalty for their disregard. 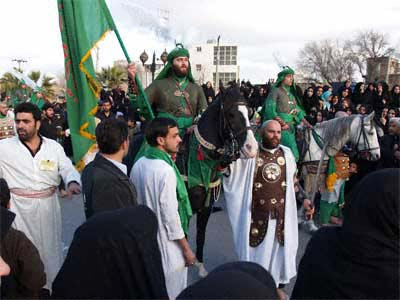 During this period, Sunni Muslims celebrate with jovial feasts and high-spirited revelry; after all, it represents the start of a new year. But for Shi’a (Shiite) Muslims, observance of Mahe Moharram sustains a far more dismal mood, as countless mourning ceremonies help to preserve a sweeping sense of grief-stricken melancholy. For within this month, the grandson of Prophet Mohammad, along with about 72 pious fellow Muslims, sacrificed their lives to protect Islam’s sanctity in the face of corruption. In remembrance of the ultimate activist, who fought the archetypal battle of good versus evil, Imam Hossein (Hussein) will always be revered as the “lord among martyrs”.

Although the entire month compels an atmosphere of solemnity, the first 10 days hold particular importance to Iranians, and other Shi’a. From the outskirts of Kufe (Kufa) to Karbala (Kerbela), Imam Hossein and his entourage suffered 10 days of devastating trials and tribulations—marked with bloodiness, betrayal, and dehydration—before the men, children, and the Imam’s infant were brutally slain at the hands of the gluttonous tyrant, Yazid. 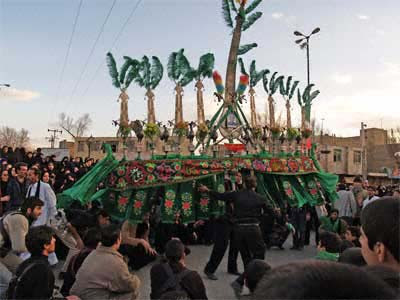 For the past eight days of Mahe Moharram, I’ve witnessed lively, animated scenes in both Tehran and Esfahan—mourning ceremonies steeped in a flurry of vibrant colors and emblematic props; winding processions of trumpeters, drummers, and standard bearers; men of all ages dressed in black garb, fervently pounding their chests, slamming chains across their backs, and chanting “Yah! Hossein!” or “Yah! Abol Fazl!”; flamboyant costumes and curbside tented theaters retelling the epic account of the Battle of Karbala, the courage of Imam Hossein, the loyalty of his half-brother Abbas (or Abol Fazl), and the overriding theme of losing the battle, but winning the campaign; and, above all, the echoing from loudspeakers of the song written expressly for the Imam, and sang in a tear-choked voice reminiscent of the smooth wail of setar. 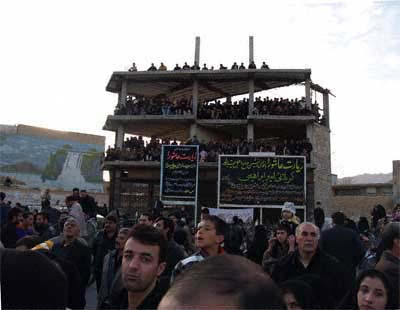 Today, in Esfahan, I was able to bear witness to the well-known caravan that embarks on a four-hour trip through the city’s main streets, conveying the details of the Battle of Karbala through an elaborately staged set of image and sound. Hopefully, the pictures in this post have helped to show how popular this ceremony is. The audience ranged in age, and stood hanging off of trees, lampposts, empty surrounding buildings, and anywhere else that offered the slightest view of the parade. I’m sure at least a couple thousand Esfahani citizens packed this bend of a street, illustrating the continuous public support for such ceremonies.

I wish I was there. looking for more pictures.

its very beutiful but its wrong that iranians people become the people who were their in the karabala... i hope i was able to convey my message. we r humans n w should nt try to represent themself as ahle bait....