Doth Mine Eyes Deceive Me? 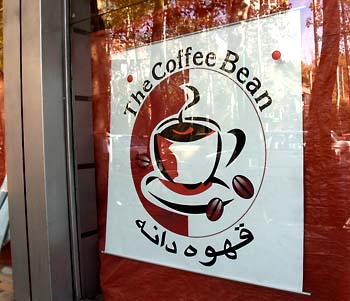 This has got to be a knock-off... American companies were kicked out of Iran, long ago, in accordance with the Islamic Revolution of 1979. While foreign investment flourishes in the country, with names such as LG, Daewoo, Mercedes Benz, Sony, Nokia, and other recognizable brands enticing Iranian consumers, American businesses have remained out of the loop (except for a handful, such as Halliburton, of course).

Nevertheless, many Iranian business people have capitalized off American brands...by creating imitations that are convincing enough to rake in the profits from eager buyers willing to spend more for American-ish goods. Take the picture below, for example:

As you may have guessed, SFC is a hybrid between KFC (Kentucky Fried Chicken) and Carl's Jr. (if not for the mutated point, the smiling stars would be identical), two fairly reprehensible--yet popular--fast food chains in the U.S. SFC, which stands for Star Fried Chicken, is packed nightly with the young, hip, chic crowds of Tehran, who do not mind doling out a bit more for the (artificially) foreign appeal.

In fact, anything sporting the English language is often enough to spur sales. Even if a T-shirt that's made in Iran reads, "Babee luv soft," or a similar misspelled and nonsensical phrase, it'll likely sell more than one without.

What's even more perplexing is that many buyers are privy to the imposter brands, and don't really care if these products unabashedly massacre the English language. Forget about correct grammar and spelling, some kind of coherent meaning, and proper sentence structure--all is overlooked and forgiven by the patron.

I plan to dedicate another post to the "Iranization" of the English language some time in the future.

Very creepy situation - you should have just gone crazy lady on him - start speaking jiberrish and talking to yourself, then scream out Dodi-al-fayed and open your eyes really wide - keep that in mind in case it happens again

Yes, Taqdeermachen, it does. It's the Persian version of "Coffee House". (Good job, I didn't know you could read Farsi!)

Oh man. Only in the fobland could you be proposed to in a taxi by a perfect stranger, who mind you does not mind that you are engaged. Gotta love it... I miss Iran...