Meet Arash Hamidi, a university graduate holding a bachelor's degree in Persian rug handicrafts, who works in international business for a Tehran firm specializing in trade and commerce. In his free time, Arash attends to his hobby of producing photographic masterpieces, such as this picture of Damavand Mountain's peak:
(click on image to enlarge) 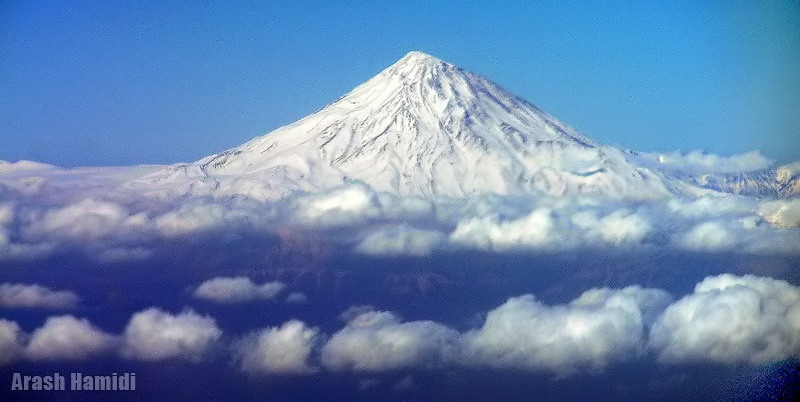 Most would agree that being able to capture this kind of splendor comes from years of training and experience that only the most seasoned photographer can possess. But Arash is only 23-years-old, and a newcomer to the photography community, dabbling in the art for about two years. He uses a method that encompasses his interests of “recording memorable moments, and seeing ordinary things from a novel perspective.”

“My main goal is to combine these three elements in my work:
Delight + Art + Aestheticism.”
Arash doesn’t refer to himself as an artist, but rather as a student, even admitting, “I used to think my pictures weren’t any good; I was never satisfied with the outcome.”

But this supposed novice has a background that tells another tale, beginning at the tender age of eight, when Arash’s drawings would win first-place in school-wide contests, a trend that continued throughout his elementary education. The young artist expanded into sketching caricatures, later becoming one of the founding members of the Free Society of Iranian Cartoonists; he was nine.

“It was during this time that I began to display my artwork on a range of subjects, both within private and collective exhibitions.”

His creative capacity knew no limits when, at age 12, he began sculpting statues and face masks, eventually adding modeling and artistic molding to his growing repertoire. Arash’s range of talent extended even further when he started writing articles and film reviews for a number of magazines.

“I watched movies frequently, and formulated lengthy critiques on the newest ones. I would then send the critiques to the magazines, where they were promptly published. Never did I disclose my age, because no magazine would have published the article of a 14 to 15-year-old boy.”

During this time, Arash became proficient in computerized graphic design, using his skills to design and print posters, labels, logos, and other paraphernalia for a series of products. After this stint, he was accepted into his high school’s cinema program, but after one term, switched his course of study to literature and humanities. The change didn’t stop Arash from helping his friends create numerous short films, or providing them with additional support in scriptwriting and sound recording. He had done all this by age 15.

“At 17, I took up theatre directing and playwriting. Upon entering university, I chose Persian rug design as my major; later, when I was 20, I began designing web sites and creating software for artists. The next year, I taught both art and computer science at my university.”

Night shot of metropolitan Tehran:
(click on image to enlarge) 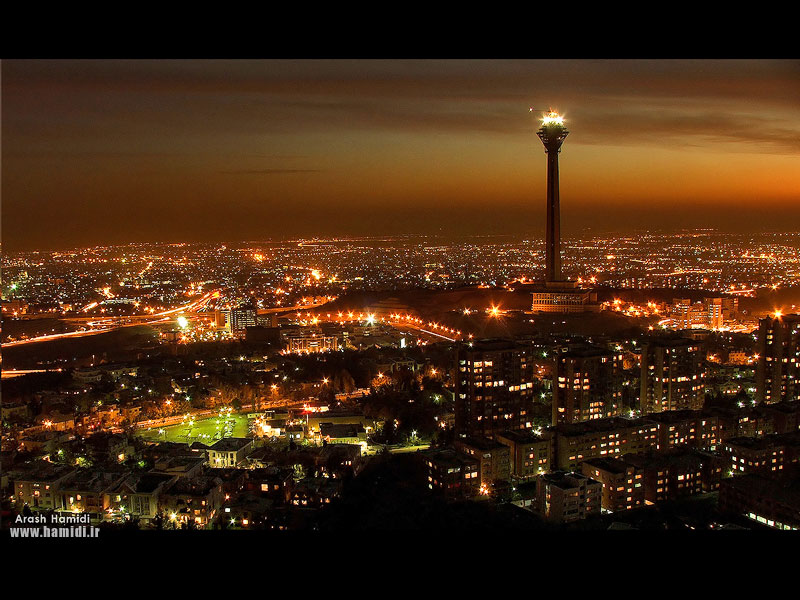 "I don’t see myself as an artist. My entire life, I’ve tried to remain a student of art. Anything I learn, I strive to teach to others because the day I don’t have any topic to present to others, will be the day I won’t have learned a new subject."

Even as an art student, it's obvious from Arash's history, and the material on his website (www.hamidi.ir) that this young virtuoso is a natural-born overachiever. I was not only impressed with his works, but also with his vast amount of experience in the arts.

Hi Shiva joon
I am glad that you put Arash's bio here and I am sure Iran is full of talented and gifted people like him. Some may not have the resources to shine.

Hi can you give me the firm he works for please? I am interested in international business as well and was wodnering the name of the firm so i can submit my resume. Is it Atieh bahar? Tahnks

Hey girl, I love your blog! I hope everyone reads your great posts because You're doing a really great job.

Keep it up, and good luck!

Wow, what beautiful pictures. Those are amazing.

I must read your previous post on Kurdistan.
Your posts are long, but very interesting with nice photos.
Good Luck

Have you quit blogging?

hi shiva
i love your blog And very nice magazine , Keep it up.
god luck ;)

you should have said that its the end, as people come and check for new posts

I just found this blog and I like it alot, but where has the blogger gone to? Are you posting elsewhere perhaps Shiva?

Nice Blog. Thanks for info and nice pics.

Just found your blog; its great.

Btw, LOL regarding the Kurdish joke. You know I went through Columbia Arch school wearing a Shalvaareh Jaaf!

There is something brilliant about the 'structure' of these pants and you can put all sorts of things in your pocket too!

you know what I think? I think this blog is professionally written by some Iranian organization. The use of English language, the political theme of some of the posts and the whole structure and feeling of the blog gives a clear feeling of Iranian state's mentality. I recommend your readers to go through the archives and think for themselves...

yeah anon, wow, i never thought of that; an iranian blog that displays an iranian cultural theme? An Iranian who is articulate in english? this can't be real! (/sarcasm)

shiva, are you ever coming back to us or have you been silenced by someone / something?

Great Job! I love your blog!

The mountain loking like its on top of a cloud is also a very nice picture.

They also attract people because the bluer hue of hid lights flickering is extremely eye-catching and looks elegant and expensive as it is often seen on luxury cars.