My friend, cousin and I went to the Korean Bazaar today, the first day of the weekend. The event was held at the Korean Church on Si-e-Tir Street in south Tehran. Within its towering brick walls we found a church, a Sunday school building, a banquet hall, a vast play area for children, and plenty of greenery. Crowds of people had shown up for the bazaar--Koreans, Iranians, and even a handful of European visitors. The tables decked with merchandise were spaced along the walls of the banquet room, amidst pictures of Jesus and the Virgin Mary. 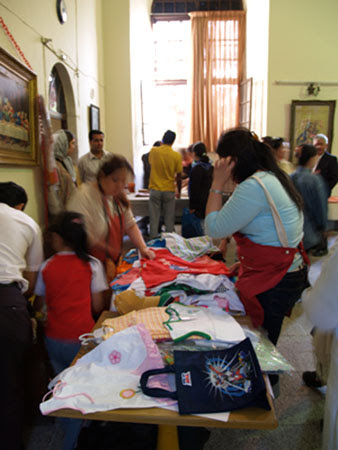 We learned of the bazaar through a few of our Korean classmates, who told us there would be second-hand stuff for sale. Apparently, it's too expensive to bring new items from S. Korea, so the community recycles its goods instead. The types of things for sale were mainly "montos" (garments similar to trenchcoats that many women wear as part of the country's dresscode), handicrafts, brand-new children's clothes, and Jesus-inspired ornaments.

The bazaar room led out to a courtyard where children played basketball, families picnicked, and we ate Korean pizzas, among other dishes.

There was even a raffle for prizes from a local Iranian department store chain called Shahrvand, but I won nothing. It was interesting to note that many of the Iranian females (less than half) and all of the Korean and European ones had removed their head scarves for the event. Perhaps the rest of the Iranian women who kept theirs on were 1)Muslim, not Christian or 2)more comfortable with their headscarves on. Of course, my friend and I refrained from taking ours off for another reason--messy hair. Nobody, I mean nobody, needs to see that.

Overall, it was an enlightening experience. Hopefully, I'll be able to attend more events held by various ethnic communities within Iran. If you know of any coming up, please give me a holler.

My cousin, a civil engineering major who attends the University of Science and Technology (3rd most prominent school in Iran), recently divulged an interesting tidbit of information. It seems that right up to the two weeks before Iran's recent June presidential election, one of his professors was Mr. Ahmadinejad. At the time, he was mayor. And apparently, he was the teacher everybody likes--friendly, laid back, cheerful, and an easy grader! He taught my cousin's traffic engineering course, while his bodyguard would sit outside.

Aside from teaching undergrads, he also was professor to PhD students. If this guy fits the classic stereotype of the cool teacher, then it's no surprise that he won the election.

"Some powerful states practice a discriminatory approach against access of NPT members to material, equipment, and peaceful nuclear technology, and by doing so, intend to impose a nuclear apartheid.

"We are concerned that once certain powerful states completely control nuclear energy resources and technology, they will deny access to and thus deepen the divide between powerful countries and the rest of the international community. When that happens, we will be divided into light and dark countries....

"Regrettably, in the past 30 years, no effective measure has been implemented to facilitate the exercise of the legally recognized right of NPT state-parties to have access to and use peaceful nuclear energy in accordance with article IV. Therefore, the General Assembly should ask the IAEA in accordance with article 2 of its Statute to report on violations by specific countries that have hindered the implementation of the above article and also produce practical strategies for its renewed implementation.

"What needs our particular attention is the fact that peaceful use of nuclear energy without possession of nuclear fuel cycle is an empty proposition. Nuclear power plants can indeed lead to total dependence of countries and peoples if they need to rely for their fuel on coercive powers, who do not refrain from any measure in furtherance of their interests.

"No popularly elected and responsible government can consider such a situation in the interest of its people. The history of dependence on oil in oil rich countries under domination is an experiment that no independent country is willing to repeat....

"Therefore, as a further confidence building measure and in order to provide the greatest degree of transparency, the Islamic Republic of Iran is prepared to engage in serious partnership with private and public sectors of other countries in the implementation of uranium enrichment program in Iran. This represents the most far reaching step, outside all requirements of the NPT, being proposed by Iran as a further confidence building measure."....
Click here for the full transcript.

Public support for the pursuit of nuclear energy within Iran transcends all boundaries of age, education levels, socio-economic status, politics, and gender. Iranians want nuclear energy because they see it as the epitome of modernity. Anyone you ask on the street will firmly assert its importance for technological advancement in the scientific, medical, agricultural, economic and many other sectors.

While Iran has consistently stated that the nuclear energy it seeks will be used for peaceful purposes, there may be a chance the country will withdraw from the Non-Proliferation Treaty (NPT) if the U.S. and/or the EU trio persist in trying to bar Iran's legal right to pursue such energy.

This is an interesting predicament...will the rule of law prevail, or the interests of the most developed and richest countries in the world? We shall see....

Hello, my special friends in America, I miss you already. As you know, I've come to Iran for a year to study Farsi. I decided this website would be the best and most efficient way to keep in touch with y'all, especially those of you who've lambasted me for my pathetic attempts to stay connected in the past.

This site will document the everyday observations of yours truly, in a land you've probably never seen, but hope one day to visit (Meri, I'm talking about you--yes, you). There'll be pictures (with my cool new Olympus SLR digital camera--hah!), daily musings, interesting facts, and more...much more. So, please, my extra special friends, visit my site often, and keep in touch. I will likely be on here regularly, as my school takes up only 2.5 hours per day...yes, plenty of free time. Plenty.

As for other guests, please feel free to participate in what I hope to be a community of curious people wanting to learn more about Iran. Anything you contribute will be welcomed, as I will have plenty of free time to bask in your thoughts. Plenty of free time. Plenty.