Last week, I traveled to Esfahan to visit family members. Anyone who knows Iran, knows that this city is one massive museum. Countless remnants of history can be seen with every blink of the eye--from the mysteriously brilliant architecture, ethnically diverse citizenry, and bustling bazaars, to the finest quality Persian rugs and renowned miniatures. At some point, one finds themselves meandering through a labyrinth of mud brick homes with heavy wooden doors, all eventually leading to the nucleus where merchants set up shop side-by-side in booths decked from floor to ceiling in everyday goods.

Since I didn't have any access to the Internet in the homes of family members (after all, Esfahan isn't Tehran--people can live without the World Wide Web), I thought I'd sum up my week's activities now, two days after my return to Tehran.

Qods Day
My trip to Esfahan fell in the last week of Ramadan, the month of fasting for Muslims. In the early period of the Iranian Revolution, Ayatollah Khomeini called for Muslims around the world to show their solidarity with Palestinian suffering at the hands of Israeli occupation. He officially declared the last Friday of Ramadan as Qods (Arabic for "Jerusalem") Day, which not only represents solidarity with oppressed Palestinians, but also symbolizes the taking back of Jerusalem from Israeli seizure. As a side note, Friday is significant because it is the Muslim sabbath, in the way that Saturday is for Jews and Sunday for Christians.

In order to gain a sense of Iranian support for the Palestinian Arab cause, I attended Esfahan's Qods Day, held in the enchanting Meydan-e-Emam, a site, which has a capacity for about 100,000 people.

As we drove to the event, we spotted many signs such as this one decorating the intersections. 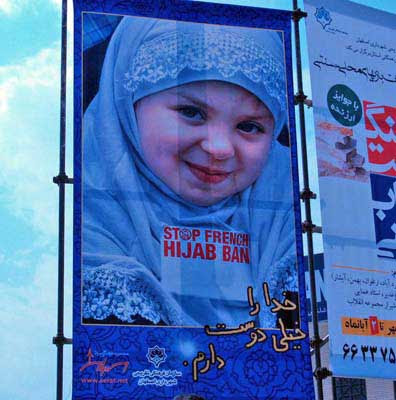 Before entering Meydan e Imam, we were greeted by this symbolic display. The man in the front represents the Palestinian freedom fighter chained down in three directions by entities representing Israeli and U.S. interests. 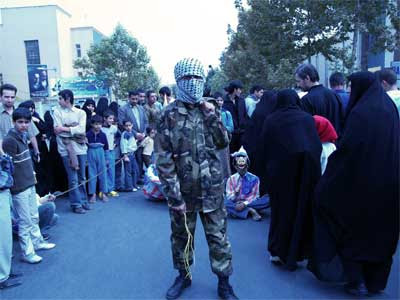 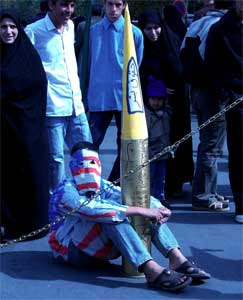 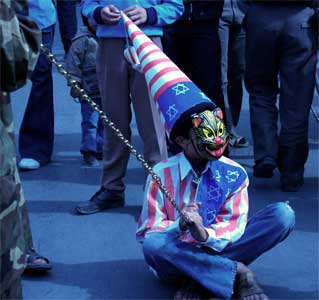 Crowds of thousands of men, women, and children came to the Meydan for Qods Day, and to participate in the Friday prayers. The Imam who led the prayers over a loudspeaker also gave political speeches denouncing Israel's occupation of Qods (Jerusalem), and its human rights abuses against Palestinians. This rally also brought the nuclear issue into play, and specifically involved the chanting of "Marg bar America! Marg bar Israel! Marg bar England!" Thousands of fists would be thrust into the air with each passionate utterance of Marg bar, or "Death to"...

The first picture below shows the turnout from the men's side (on the right half of the Meydan), while the second is taken from the left half, where the women gathered. 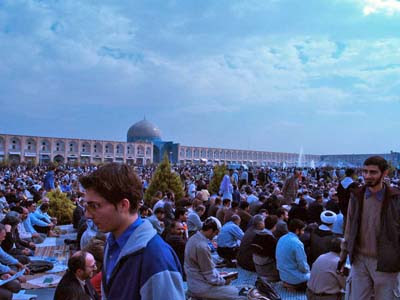 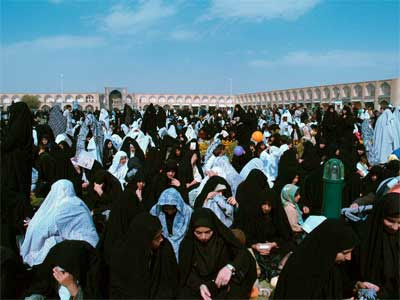 In the end, it became clear that the central theme of Qods Day was Iran's right to nuclear energy, a message stamped on fliers, posters, and other paraphernalia. Throughout the day, news reports followed the masses all around Iran; from the northern point to the southern tip, video clips showed tens of millions of people in every major city across Iran marching through streets with fists thrown high, and shouts of protest drowning out all other noise. It was surprising to witness the amount of people who had poured out of their homes and into the streets and mosques in support of Qods Day.

Week in Brief, Part 2, will feature more observations in Esfahan.

Thanks for sharing your observations. Out here some of us have the impression that Iran, under Ahmadinejad, is more daring and perhaps more provoking regarding the Israel-Palestinian issue. It seems like the latest protests have been larger and louder than those in previous years. Another example I've come across is an animation film for kids about suicide attacks that has been broadcasted on IRIB. Are these just biases in reporting by our media or is there a real change in policy?

Looking forward to read the next part.

Thanks for commenting. About the Israel-Palestine issue, I haven't experienced incidents in which provocation occurred. News broadcasts do frequently report on various crimes committed by the IDF, as well as general political and economic news in the region. However, reports seem to focus on numbers and facts, rather than emotion. The closest I've seen to Isr-Pal propaganda was Qods Day, which was recognized by an earth-shattering amount of supporters. So, I don't see it as propaganda, but as an actual solidarity movement. (Of course, the speeches of the day, at least in Esfahan, mainly centered on Iran's right to nuclear energy, which underscores the idea that provocation vis-a-vis Isr.-Pal. may not exist.)

As for the animation, I think I saw it today. It was a cartoon explaining the conflict within the region in a way that kids could understand, complete with IDF soldiers, Ariel Sharon, Palestinians, and the wall. Overall, I enjoyed the cartoon's story-like simplicity, and didn't sense any obvious bias. I'll try to get a copy of it up on the site. Furthermore, I didn't see any suicide bombers being glorified in any form.

You definitely brought up an interesting topic concerning Isr-Pal in Iranian media. I will try to write more on this subject in future posts.