(Note: This post is lengthy and full of pictures. I apologize to those who have a slow Internet connection -like me, at a whopping 33.6 Kbps- and must sit through the painstakingly sluggish download of the images. Thank you for your patience.)

Masjed Jame (Friday Mosque)
The history of Isfahan Jame Mosque could be regarded as the history of the city of Isfahan. The mosque was founded contemporaneously with the foundation of the city, and the later changes in the form and skeleton of the mosque are reflections of the political and social events of the city. Amongst the said mentionable events is the fire in the mosque and the library during the Saljoogh rule committed by the pagans (Malahedeh). The other mentionable event is the bombardment of the south-western section of the mosque during the imposed Irano-Iraqui war, but all devastated parts have been repaired in the initial form.
(Excerpt taken verbatim from an information room set up for tourists at the entrance.)

Besides the political and social significance encompassed within this historical treasure chest, the site also serves as a record of Iranian Islamic architecture spanning a period of more than 1,000 years. The mosque prominently looms over a massive courtyard, the buckle that connects the belt of buildings enclosing the complex.

The part that fascinated me the most was the rich ornamental and structural architecture. One is easily humbled by the sheer size and number of minerets, columns, arcades, and stone-chiseled inscriptions sweeping seemlessly across porches, domes, pillars, and more. Beginning in the 10th century, Jame Mosque has undergone intricate and tedious construction--from the rebuilding and renovation of destroyed sections, to the addition of structural and decorative elements.

Generations of architects have worked on what I believe is the greatest jigsaw puzzle of humankind. Actually, it's more like a grand project, carried out over multiple lifetimes, with an unspoken understanding of the final result. It's as if the work in progress had a mental blueprint that passed from one architect to the next over centuries, constantly getting better with age. Every inch of brickwork, ornamental adornment, mosaic tilework, ancient inscriptions, and innovative construction styles speak of a chemistry derived from the flawless application of scientific and mathematical finesse.

From afar, you'd think the same group of architects built this landmark in accordance with a shared plan. Everything appears unified and harmonious. However, up close, you can see history unfold in all of the inconsistencies. For instance, there are over 100 arches within the walls of Jame Mosque (belt and buckle), but because multiple architects helped construct these arcades, designs vary from one arched ceiling to the next. Therefore, almost each dome displays a unique geometric brick pattern, believed to distinguish one architect's work from the next. Below are only a handful of arched ceilings illustrating this effect: 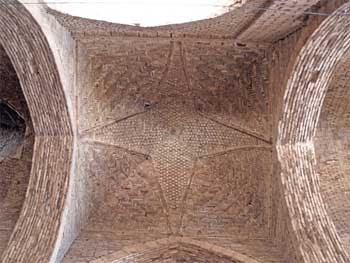 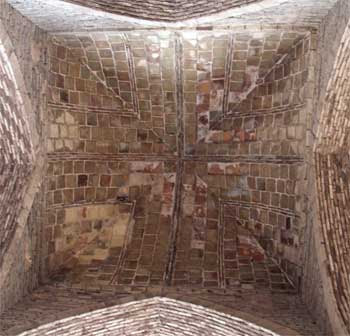 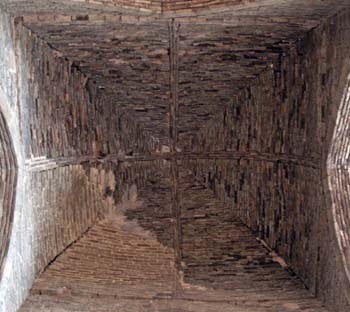 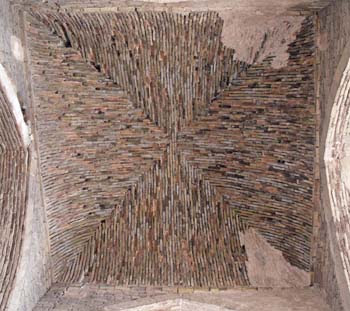 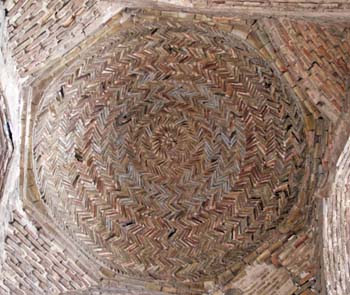 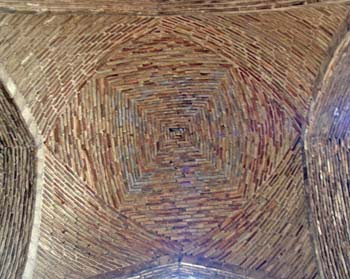 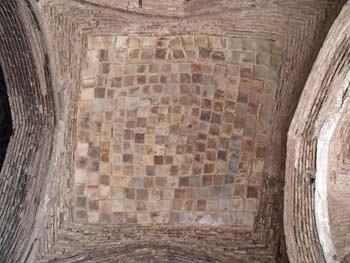 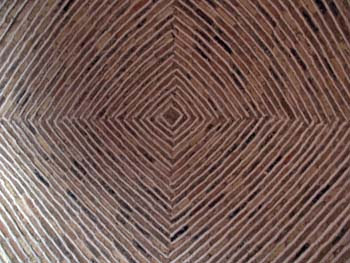 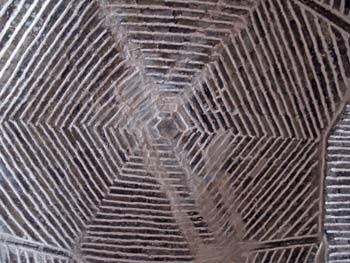 The brickwork that makes up the bulk of Jame Mosque shows similar identifying characteristics. Below are a couple examples of bricks marked with distinct "signatures" of architects who worked on building the monument at various points in time:

The Winter and Summer Praying Halls (below) maintain the same comfortable temperature all year-round. Due to unique architecture, indoor and outdoor temperature is exchanged slowly. As a result, the place remains warm in the winters and cool in the summers. While I wandered through these halls, I sensed a certain aura of tranquility, perhaps because of what felt like the perfect temperature. Imagine that--the perfect temperature!

Well, that ends my "Week in Brief" for Esfahan. There's much more to tell, but I must move on. I'll try to describe the city-museum through images that I plan to upload soon, in the Photos section, under "History". Due to a sudden shift in my schedule lately, I have not been able to put aside enough time to update my Photos. Thanks for bearing with me!